Never has the entire auto industry’s overall sales performance been so unworthy a tool for judging new vehicle demand. Never has the inability to assess demand made it so difficult to forecast future success.

To be fair, there have been similar occasions. When sales figures at Toyota and Honda appeared dismally low in mid-2011, we knew it wasn’t because demand for Japanese vehicles suddenly dried up. Japan’s Tōhoku earthquake and ensuing tsunami caused sharp production cuts, not just in Japan but also abroad. By May of 2011, Toyota sales in Canada were down 36 per cent.

The difference in 2021 is the universality of the problem. From one corner of the auto industry to another, with increasing severity from one quarter to the next, 2021 is marked by microchip shortages, supply chain constraints, and shipping delays. Although demand for new vehicles is high, third-quarter auto sales dropped by 12 per cent compared with last year.

Our challenge is to determine which vehicles will end 2021 as top sellers in their respective categories at a time when there’s no telling if any automaker will actually produce nearly enough vehicles to meet even a portion of their demand. With some exceedingly tight races — the top two cars are separated by little more than one sale per day — landing a first place position on New Year’s eve will have next to nothing to do with finding enough buyers. It will simply be an indicator that one manufacturer found just enough parts to build just enough vehicles.

Regardless of all the unknowns, we’re making educated guesses based on the outcomes from 2021’s first nine months. The following 15 vehicles are likely going to end 2021 as top sellers among 15 best-selling automotive categories. 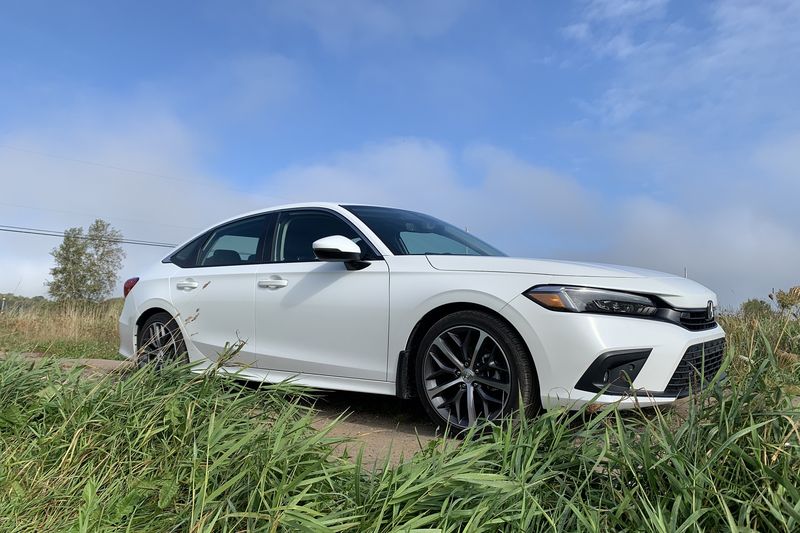 Although its lead is marginal and the race between the top two cars is closer than in recent memory, can we bet against the 23-time winner? The Honda Civic’s reign as Canada’s best-selling car began in 1998. With October figures included (they’re not available for many brands that only report quarterly), the Civic’s 36,683 sales place the Toyota Corolla only 286 units abaft.

Even as Canada’s overall light vehicle market grew by more than 13 per cent through 2021’s first nine months, minivan volume fell 13 per cent. Toyota’s new hybrid-only Sienna took advantage of an opportunity as rival people carriers — especially at Honda and Chrysler — shed volume at a wildly unhealthy rate. Toyota sold 9,280 Siennas between January and September, enough to grab 32 per cent of the market. That’s up from 18 per cent just one year ago.

Despite a growing number of competitors, the Toyota Tacoma managed to increase its share of Canada’s midsize pickup truck segment in 2021. With 11,741 sales, Tacoma sales are up 13 per cent through 2021’s first nine months compared to the same period of last year. That was enough to take the Tacoma’s market share up to 33 per cent from 31 in 2020. The Tacoma outsells its nearest rival by a 27 per cent margin.

Combined, GM’s two big trucks, the Sierra and Silverado, produced 84,398 sales in 2021’s first nine months. Setting aside the fact that such a calculation does indeed require two trucks, Ford’s F-Series still leads the GM duo by more than 4,000 units this year. The F-Series’ 88,421 units trails 2020’s nine-month total by 16 per cent in a full-size truck market that’s down 8 per cent on slim availability.

After a long run from the Ford Escape, the Canadian-built Toyota RAV4 claimed the top spot in Canada’s SUV/crossover category in 2016. The RAV4 hasn’t surrendered the top spot since. Toyota Canada’s RAV4 total is 27 per cent from 2020 levels. Back in 2016, over the course of 12 months, Toyota sold 49,103 RAV4s. In only nine months of 2021, midst a pandemic and severe inventory restrictions, Toyota has already sold 52,828.

Audi is flying high in 2021, narrowly outselling BMW through the end of September and trailing Mercedes-Benz by fewer than 1,000 vehicles. Audi’s primary claim to fame is this Q5, sales of which soared to 8,114 over the first nine months of the year. In order to catch the Q5, the Lexus RX would need to outsell the Audi by 286 units per month in 2021’s final quarter.

Small utilities are hot. In fact, there’s no segment hotter than subcompact crossovers, now Canada’s third-highest-volume category. The Hyundai Kona is at the top of the heap, miles in front of its top-selling rival. Hyundai reported 23,761 Konas in 2021’s first nine months (up 21 per cent from last year), more than 5,000 units clear of the Subaru Crosstrek. Both are their respective brands’ top sellers.

Toyota sold 15,835 Highlanders in Canada through 2021’s first three-quarters, a 67 per cent year-over-year improvement. At this stage last year, the Ford Explorer was in the top spot among three-row utility vehicles, but the Highlander’s momentum has carved out a broad gulf — the Explorer’s 3,502 units behind. Also at this stage last year, the Dodge Grand Caravan was still a high-volume vehicle with 18,375 sales. So far this year, Dodge and Chrysler have combined for only 12,449 minivan sales.

With a base price of $101,900 and 1,626 sales between January and September, the Mercedes-Benz GLS produced well over $160 million in revenue for Mercedes-Benz in the Canadian market alone. (That’s assuming most GLSs are entry-level un-optioned models, which is decidedly not the case.) Not only is the pricey Land Rover Range Rover 588 sales behind, the GLS also outsells many more moderately priced luxury vehicles, from the Jaguar F-Pace and Lincoln Nautilus to Mercedes-Benz’s own E-Class and A-Class.

The Canadian auto market was in recovery mode for much of 2021, but the Ford Mustang’s 4 per cent sales decrease doesn’t reflect that fact. No matter: nothing in this category sells in anything resembling Mustang-like figures. Ford sold 3,780 Mustangs in Canada between January and September. Although Chevrolet’s 1,857-unit Corvette total embarrasses the brand’s own 892 Camaro units, nothing performance-oriented is remotely as common as the Mustang.

Tesla doesn’t report monthly, model-specific, market-specific sales figures. Estimates from, for example, Automotive News, suggest Tesla sold nearly 16,000 vehicles in Canada over the course of 2021’s first nine months, with the overwhelming majority of those being Model 3s. If there’s a significant rival for the Model 3’s estimated 9,600, it’s Tesla’s own Model Y. Chevrolet reported 4,675 Bolt sales through the end of September.

Given the scarcity of vehicles on dealer lots, this could be a close one. Combined, Q1, Q2, and Q3 volume placed Ford ahead of Toyota by fewer than 14,000 units. That’s barely more than 1,500 vehicles per month, which is roughly the number of RAV4s Toyota can sell in a week. Assuming Ford can fill F-150 orders while also cranking out a decent number of Escapes, Explorers, Rangers, and Bronco Sports, Ford should end 2021 as Canada’s best-selling brand for a 13th consecutive year.

It appears as though the Ford brand is destined to outsell the Toyota brand, but when reviewed from a group-wide perspective, strong Lexus volume and limited Lincoln sales will likely tip the scales in the other direction. Combined, Toyota and Lexus lead Ford and Lincoln by a mere 1,228 vehicles through the first 273 days of the year. Statistically, that’s a wash. In Q3, Ford Motor Company was selling nearly 1,400 vehicles every two days.

Not the Bronco, not the Mustang Mach-E, not the Maverick; 2021 is the year of new products at Ford. But the top seller, by leaps and bounds, is the Bronco Sport; 5,943 of which were sold in 2021’s first three-quarters. Kia’s 3,630 Carnivals make a van the second-best-selling newcomer, but the Carnival won’t close that gap in Q4.

In ordinary times, 2021 should have been the Ford F-Series’ year to utterly dominate. There’s a new F-150 at a time when the market is craving pickups. After all, full-size trucks were responsible for more than one-fifth of the auto market’s volume a year ago. Unfortunately for Ford, the company simply couldn’t build enough F-150s, and total F-Series volume slid 16 per cent from 2021 levels, dragging down the full-size truck category at large. Nevertheless, there is no vehicle that comes close to matching the F-Series’ 88,421-unit total. Ram’s pickup line is outsold by the Ford to the tune of 1.6-to-1.